Melbourne, Brisbane, Lords, The Oval and now Centurion. India had a formidable year and have broken though South Africa’s fortress to go 1-0 in the 3-match series.

India were the better team throughout the first Test, showed better application with the bat with KL Rahul’s masterful century, and greater control and accuracy with the ball. What India showed was what a difference a good opening partnership makes.

All the talk was about Jasprit Bumrah, and yes, he bowled some extraordinary deliveries, but it was the backup bowling of Mohammed Shami and Mohammed Siraj that were equally impressive. A dominant bowling attack that over the past 12 months have done wonders away from home. This is one attack that can bowl on any track, anywhere and still produce the goods. They showed that once more in the first Test. I expect nothing different for the second.

South Africa’s batting was once again problematic, failing to reach even 200 in both innings, 197 in the first and 191 in the second. While it’s said you need to take 20 wickets to win a Test match, you simply cannot win it when you can’t score enough runs, and South Africa once again, failed to do so. Captain Dean Elgar was honest enough to admit this “with bat in hand, we let ourselves down”. Only trouble is, it’s all been said before and we still haven’t seen any improvement. This is now another new year, can this be the year South Africa finally show determination, grit and patience with the bat?

One advantage to such an inexperienced batting line up, is that no-one’s place (other than Elgar’s) is guaranteed, they all have to work hard to keep their place and with that, can hopefully come the type of resilient, fighting, patient batting we have longed for.

Keegan Petersen has been getting an unfair amount of criticism. In the three Tests he’s played, he’s had to come to the middle with the score on 0-1, 1-1, 4-1, 2-1 and 1-1. Whilst he is a genuine number 3, it is an enormous amount of pressure on an inexperienced set of shoulders. Why aren’t questions being asked of the opening batsmen, who have failed to continuously put on a decent, solid opening stand. The job of the openers is to see off the new ball, dent the opening bowlers and set a platform. Markram and Elgar are just not doing this and haven’t been doing this for a very long time. The last time they put on a fifty opening stand was January 2021, and that was against a severely depleted Sri Lankan bowling attack. Put them up against a strong attack, and they struggle. You have to go all the way back to January 2019 for another fifty-opening stand, at home against Pakistan. Two fifty-plus opening stands in 3 years is unacceptable at this level.

Sarel Erwee is in the squad, he had a promising SA-A series against India prior to this series starting, with 2 half-centuries, opening the batting. What would it hurt to give him a try, and place Markram in the middle where he could have an easier time against the older ball?

While the batting has once again been problematic, for once, all the blame cannot go on the batsmen. KG Rabada and Lungi Ngidi failed to capitalize on the new ball and favourable bowling conditions during the first Test, bowling far too short and wide. This is an area they need to correct going into the second Test. They’ve both been playing long enough to understand the importance of the new ball, watch India and how they bowl, watch Australia, who are both ruthless.

With the shocking news that broke immediately after the conclusion of the first Test, Quinton de Kock has retired from Test cricket, with immediate effect, South Africa will have no choice but to pick a replacement and decide between Ryan Rickelton and Kyle Verreynne. Verreynne has been next in line for a long while and therefore, in my humble opinion, should get the nod. He’s also had experience in the international game, with 2 Tests and 9 ODIs under his belt. He has a first-class average of 51.95 and has been put in some solid and fighting knocks for the Cobras over the years. Just the type of player they need now with the team in disarray. Rickelton will get this chance. Perhaps to start with, in the limited overs games.

Wiaan Mulder had a Test to forget at Centurion, taking 0-74 with the ball and scoring only 13 runs with the bat. He has yet to make a stand-out contribution to the team, in either discipline. With Marco Jansen performing so well in the first Test, questions on Mulder’s involvement in the team should be asked, especially when South Africa must bring in Duanne Olivier for the New Years Test. Mulder is adequate for a fifth bowling spot, not a fourth.

Then there’s the small matter of Keshav Maharaj. While I am a huge Maharaj fan, the simple fact of the matter is he was not used at all in the second innings of the first Test and at the Wanderers, with rain predicted once again and overcast conditions, I expect the same to happen again, therefore I believe he should be rested for the second Test.

The New Years Test starts on January 3rd on what could be a lively Wanderers pitch and India, sniffing a series victory will be hard to keep quiet. South Africa are a resilient team, and now, more than ever, need to come together as a team and show some unity and defiant team spirit.

h J R
The Popping Crease @poppingcreasesa Beautiful yorker from Matthew Boast!! Good to see that skill in someone so young #U19CWC

h J R
The Popping Crease @poppingcreasesa Brilliant 22 run win for Zimbabwe to level the series!! What a series this is #SLvZIM

h J R
The Popping Crease @poppingcreasesa What a century from Dasun Shanaka off 93 balls!! Maiden ODI ton 👏👏 But it's getting very tight for SL with 56 needed from 33 #SLvZIM

h J R
The Popping Crease @poppingcreasesa Another late order collapse from SA, losing 5-24 as they finish on 231-9 104 of those runs came from Brevis Incredible bowling from Uganda at the death #U19CWC

h J R
The Popping Crease @poppingcreasesa Captain Murungi is on point, gets his 3rd wicket SA 216-8 after 47.1 #U19CWC 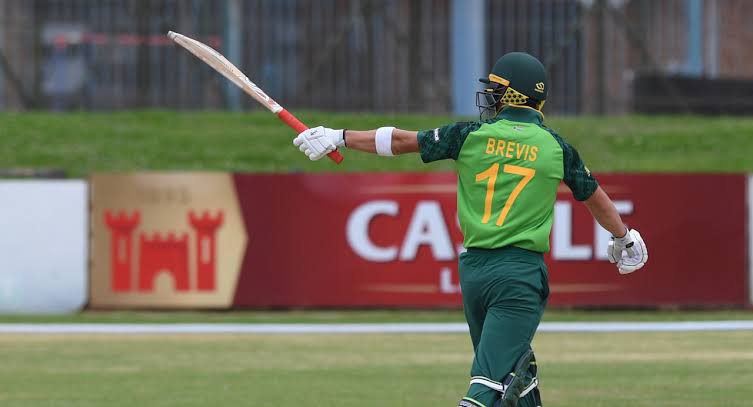